Foundation Act for the new building of the Institute 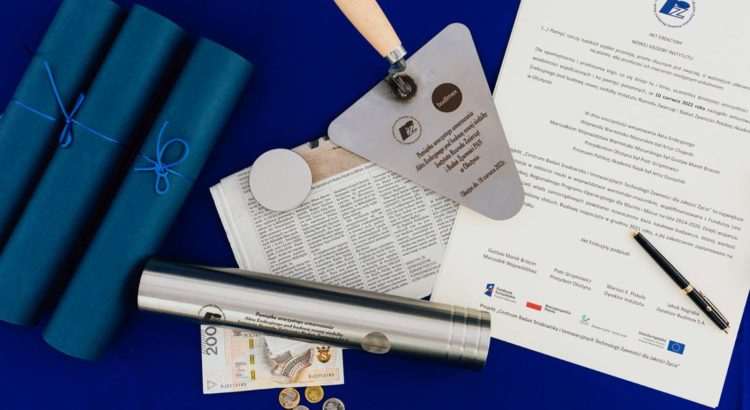 The groundbreaking ceremony for the new building of the Institute of Animal Reproduction and Food Research PAS took place on June 10. The event was attended by many distinguished guests from the world of science, business and regional authorities. This is the beginning of a new era in the history of the Institute. 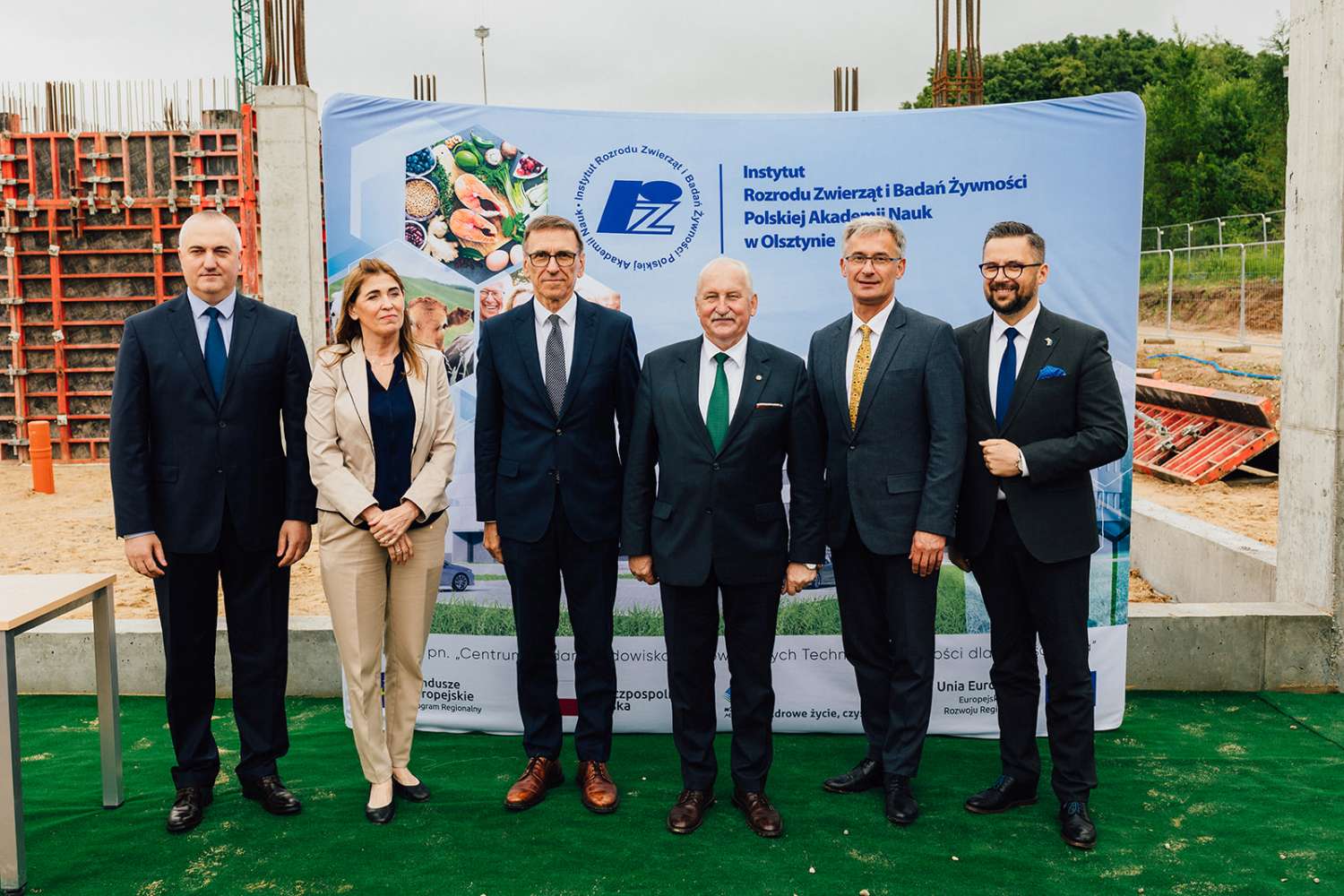 The groundbreaking ceremony for the new building of the Institute took place on June 10 at noon. The investment is part of the project „Center for Environmental Research and Innovative Food Technology for Quality of Life”, which is located near the Olsztyn Science and Technology Park.

Construction of the new headquarters of the Institute officially began in mid-December 2021. It will have its seat at Władysława Trylińskiego Street, in the area of the Olsztyn Science and Technology Park. On June 10, a time capsule with the Foundation Act, local press, and coins was placed in the existing foundations of the building. The ceremony was attended by guests from the world of science, business and regional authorities.

The Foundation Act was signed and embedded by: Prof. Mariusz Piskuła – Director of IARFR PAS, Gustaw Marek Brzezin – Marshal of the Warmińsko-Mazurskie Voivodship, Piotr Grzymowicz – President of Olsztyn and Jakub Nagraba – General Construction Director of Budimex S.A., the general contractor of the investment. 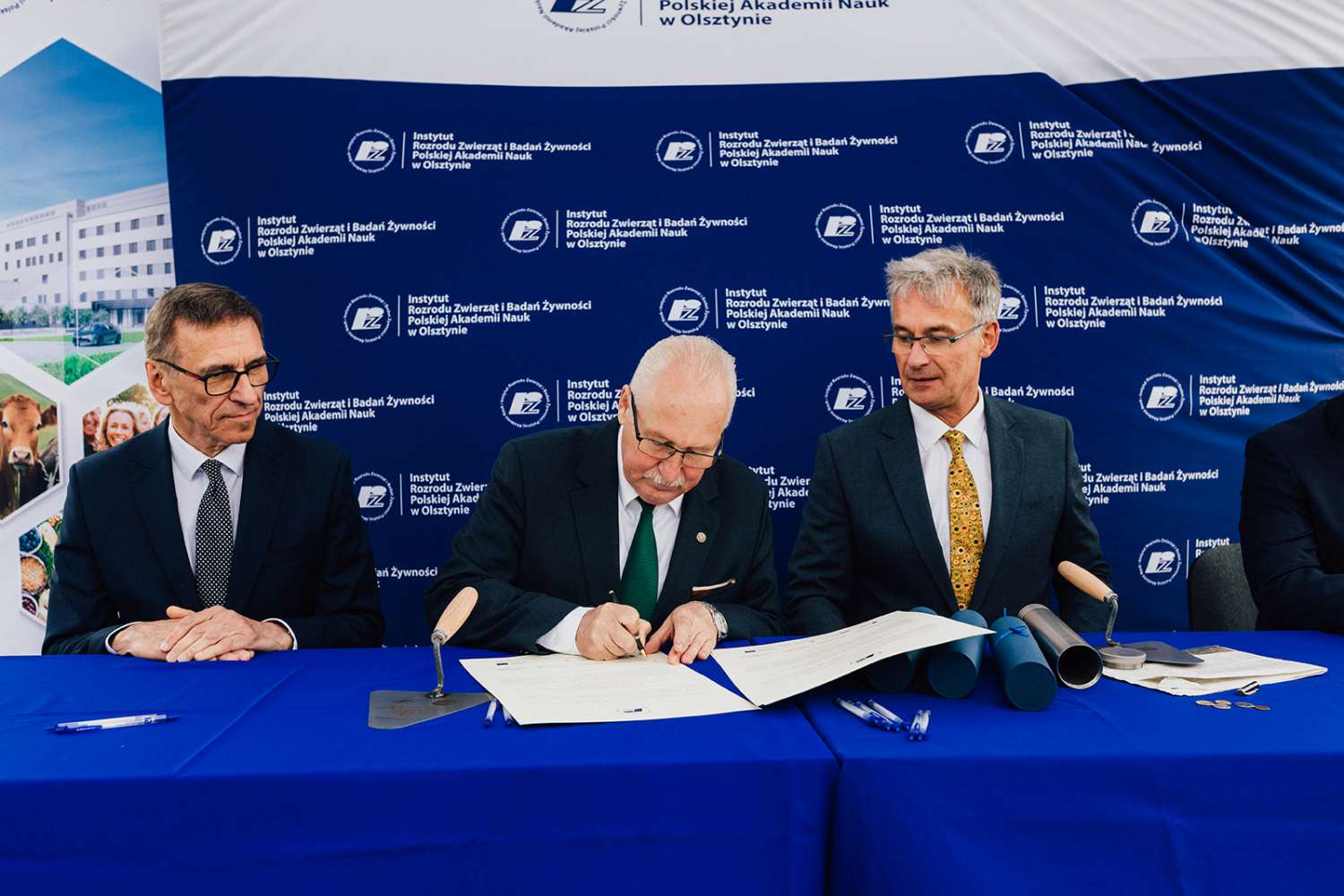 The first to speak was Prof. Mariusz Piskuła:

– I am very happy that we are at this point in history where we are now. For a long time, we have suffered from a shortage of space, and I know from my own experience that the Institute’s location near a technology park would be a great asset. The project has been going on for 10 years now and we are well on track to bring it to a happy end. I think that this time capsule will survive us – maybe one day someone will get to it and read about what happened here in 2022 – said Prof. Mariusz Piskuła. 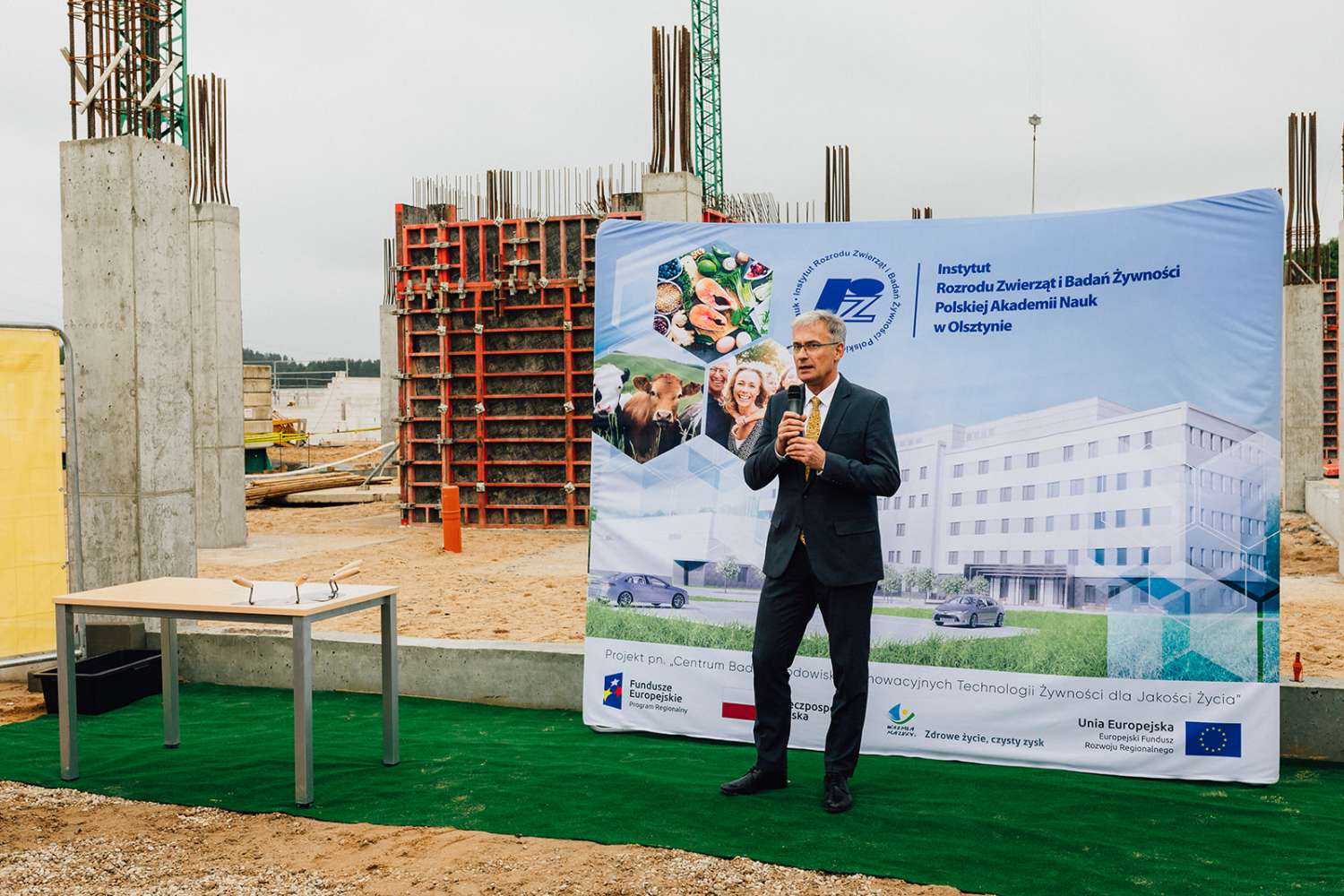 The second speaker was Gustaw Marek Brzezin – Marshal of the Warmińsko-Mazurskie Voivodship, who congratulated Prof. Piskuła on his perseverance and being a notable beneficiary of the regional operational program. The Marshal handed Professor Piskuła a special commemorative letter.

– This is not the first project of the Institute, it is the whole history of well spent funds, not only for the sake of science development, but the whole society as such. In such circumstances, I always recall our experiences in Brussels when we were the representatives of the European Commission, and Professor Piskuła, like the best teacher, preached about Warmia and Mazury having great opportunities. This project is a summary of that vision. At the end of the availability of EU funds, I would like to point out that the co-financing of about PLN 80 million for the development of the state-of-the-art research and development center will be continued from regional funds. I am convinced that with such research facilities and personnel as Professor Piskuła leafs, we will become a leader. You can already hear about Warmia and Mazury not only in Poland but also throughout Europe – added Gustaw Marek Brzezin. 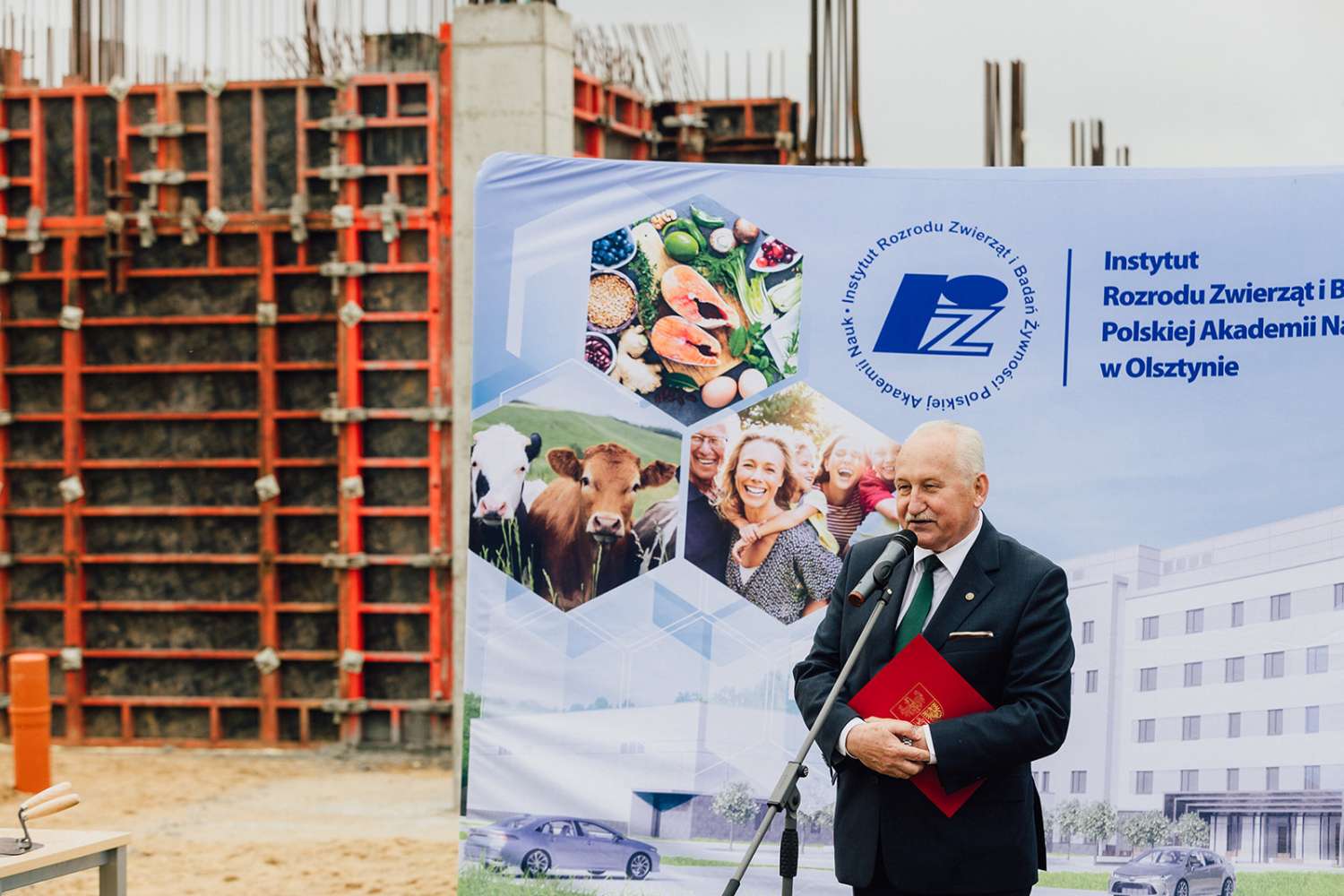 – We are on the right track with the development of Warmia and Mazury, as well as the growth of Olsztyn. I am convinced that what we have prepared earlier in the development plan of the city will allow the Institute to achieve success in Poland and Europe. The new seat of the Institute will be a dream come true for several generations of scientists. I think that locating the building by the Olsztyn Science and Technology Park is an excellent idea as it allows the creation of a new space for running science in our city, with the option of turning it into practical and innovative solutions – added Piotr Grzymowicz, President of Olsztyn. 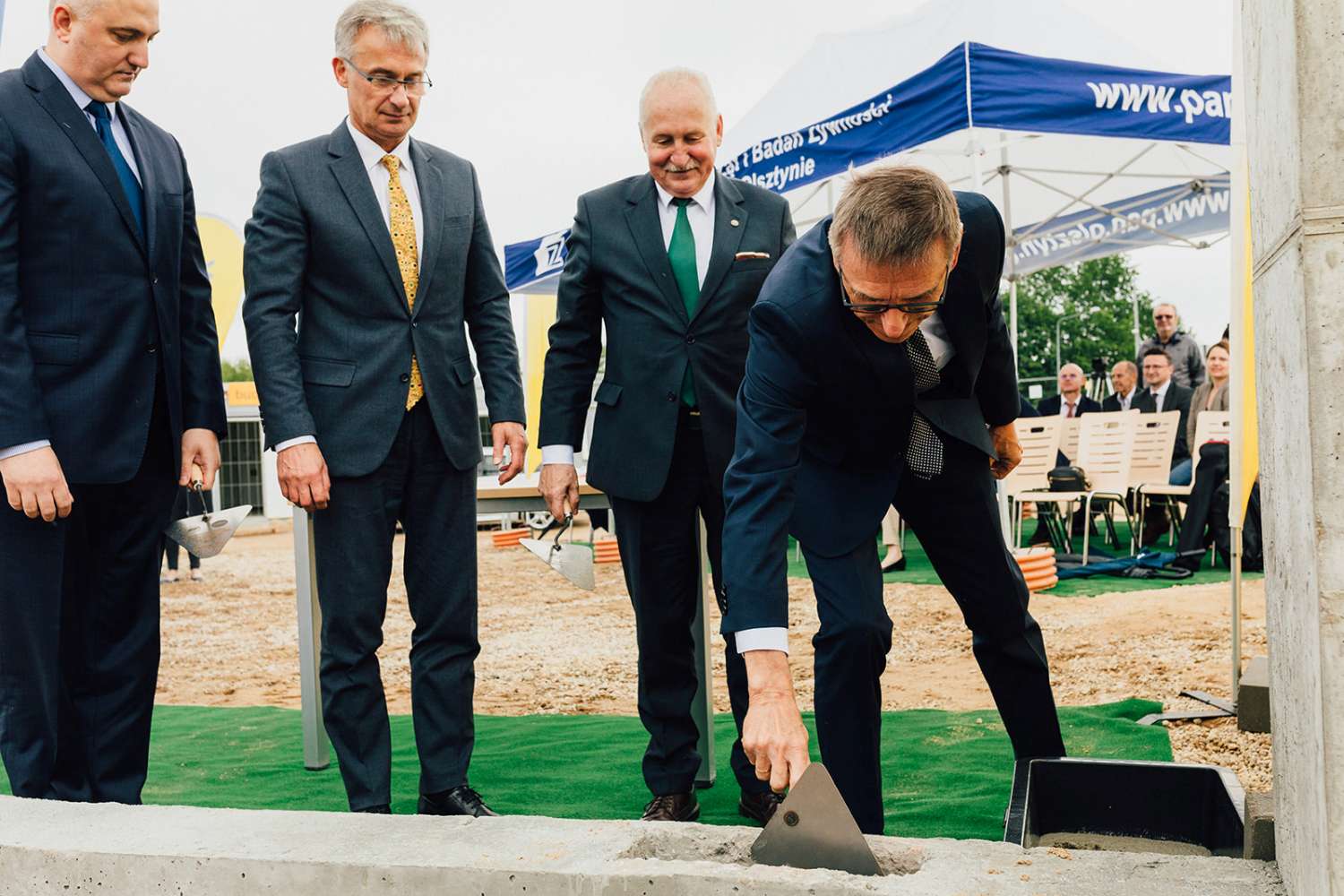 After the President’s speech, the groundbreaking ceremony took place, and then the guests took the floor.

– This is a very important moment for Olsztyn – the building of the Foundation Act for the new seat of the Institute. This is an example that Poland can develop evenly – not only in large agglomerations but also in smaller ones, with equally large scientific potential. I am glad that I could make my contribution to the realization of this goal. Olsztyn is joining the big world of science – we should all be proud of that. Olsztyn stands for science! – said Dr. Marcin Kulasek, MP.

At the end, Jarosław Babalski, read out the letter on behalf of Artur Chojecki, Warmian-Masurian Voivode.

A new era of the Institute

Completion of the construction is scheduled for September 2023, and already a year later all departments of the Institute of PAS, currently located in two locations in Olsztyn and two in Białystok, are to move in. This will facilitate cooperation between scientists, increase the potential of the institution and create optimal conditions for conducting innovative research. 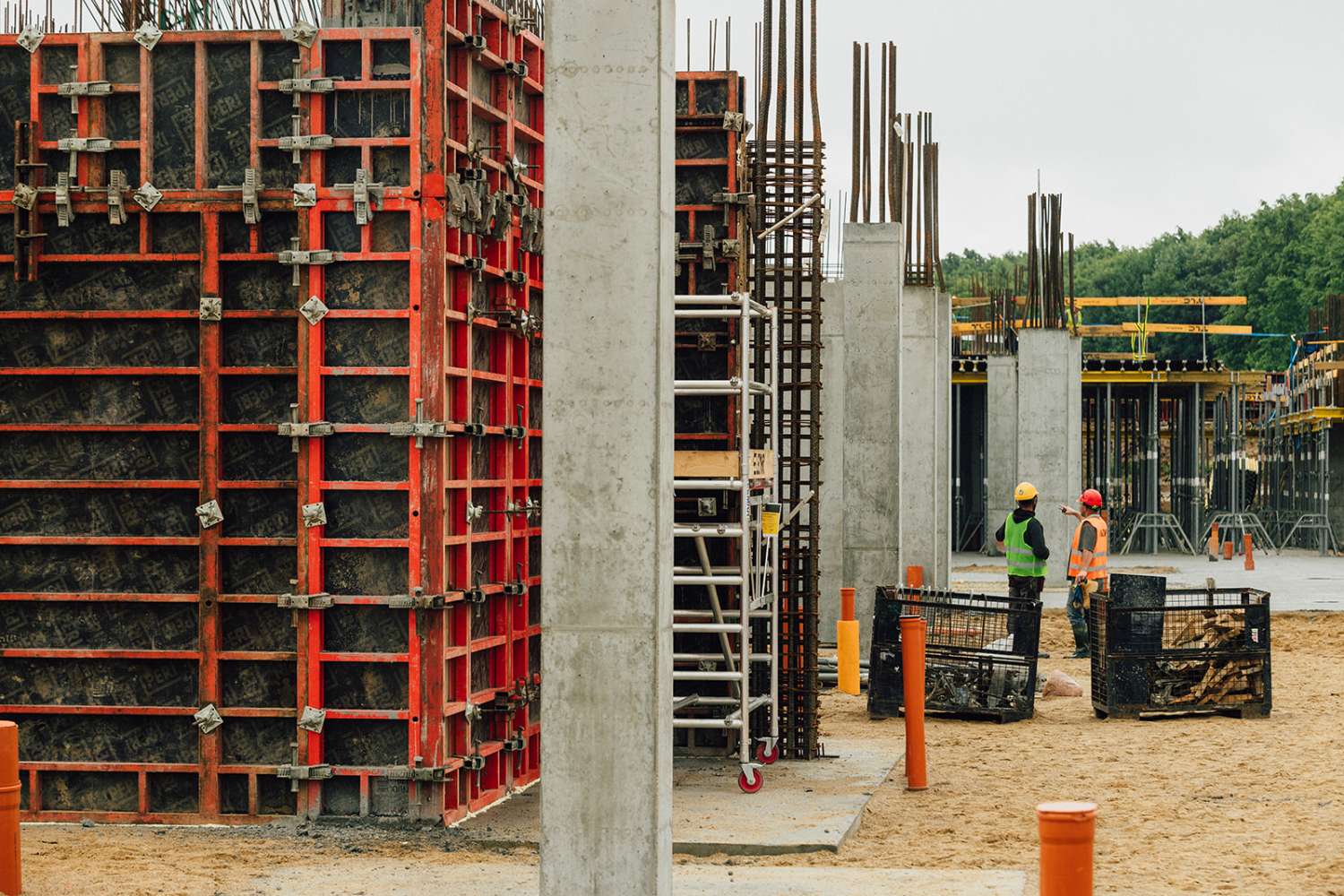 The facility will have five floors and is being built under the design-build formula, which means that the contractor – Budimex – has prepared the project and is implementing it based on the functional-utility program developed by the Institute. The usable area of the building will be about 7.5 thousand square meters, and its cubature will be about 24 thousand cubic meters. The investment will also include access roads, parking lots, a roofed shelter for bicycles, and green areas.

Funds for the project come, among others, from the European Union, the Regional Operational Programme for Warmia and Mazury for 2014-2020, and the volume of funding is more than 79 million PLN. The entire project including equipment is an investment of PLN 95.4 million.